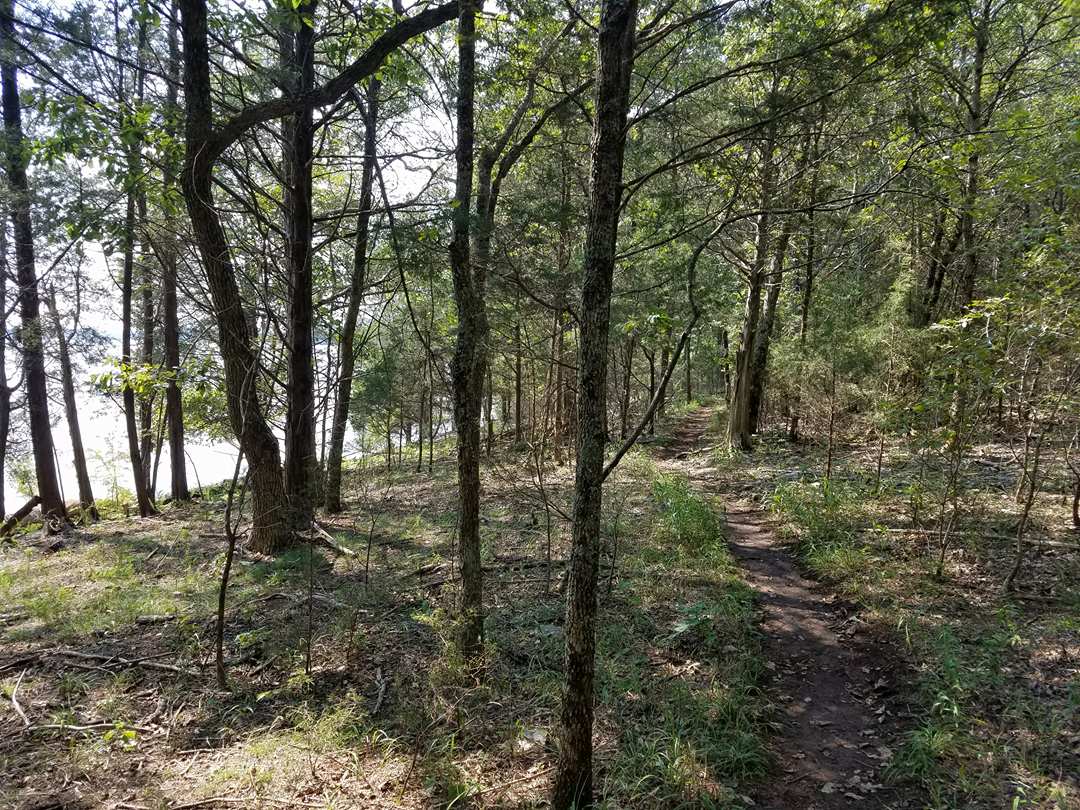 I hiked the 5.5 mile in-and out (11 miles roundtrip) Volunteer Trail at Long Hunter State Park to scout it out as a location for one of my beginner backpacking groups since there are two backcountry campsites at the end. The trail is one of the easiest I’ve ever hiked: flat, totally shaded, by the water, well-blazed and signed, great places to take a break, and less than 30-minutes’ drive from my house.

It is also the most trash-covered trail I’ve ever hiked.

More about the actual trail:

It winds along near the shore of Percy Priest Lake, and the 5.5 miles to the campsites are fairly level and rock-free. Some of the trail as you near the end is a bit overgrown, but always easy to find. I went in early September and there was plenty of shade; I was rarely in the sun at all. There’s also some wildlife, more than just squirrels and birds. Since I was alone and am quiet, I saw a young buck, four does, and five fawns.

The campsites are well-marked, and full of nice flat spots. There is a fire pit with benches in each. Just past mile 5, if it’s rained recently, there’s a clear small stream to get water for camp if you don’t want to get it directly from the lake. As with all Tennessee State Parks, as of 2016, you must make a reservation (which serves as your permit) for the backcountry campsites. The fee is $8.

And now, the boaters:

The trail winds near the shore, and from mile 1 to mile 2, boaters anchor in various party coves and blare music, scream, and generally ruin any peace on holidays and weekends throughout the summer. It gets a little quieter from mile 3 on, but is still present. They anchor in the coves, come ashore with their massive Coleman 500-people tents, Styrofoam coolers, and endless amounts of beer. They illegally camp in this state park near the shore, and leave a massive amount of trash in their wake. Careless folks also throw trash overboard, which washes up near the trail during storms.

When I hike, I usually carry a couple of plastic grocery store bags to collect trash that I find. Both my bags were overflowing before I reached mile marker 2. I soon discovered that the first two miles were the cleanest; miles 3 to 5.5 were full of trash.

Incensed at this as I took a break at Campsite 2, I started thinking about possible solutions. And as much as I would love the lake docks to charge a fee for “environmental services,” i.e. organized trash pickups using ATVs or boats, etc., I know that’s a long shot. Maybe I could pitch it to Metro to make it a mandatory community service trash pickup route. But I know the one thing I do have control over: me. And some sway with other folks who love the outdoors. I organized a trash pickup for a few days later and we picked up more than seven 13-gallon bags of trash, as well as a sleeping bag and backpack which we filled with trash as well, and lugged it all 5.5 miles out of the woods.

Summary: Fantastic trail for beginners, both hiking and backpacking, but littered. I encourage everyone to give this trail a chance, and bring a few bags to collect trash on the hike back out.

Wilderness is a necessity

“Thousands of tired, nerve-shaken, over-civilized people are beginning to find out going to the mountains is going home; that wilderness is a necessity…”

Birthday week present from @thrill_billy #climbing #happybirthdaytome @team_edelrid #edelridboaeco
I NEED FALL WEATHER. Until then, check out the Warner Woods trail (link in bio)! #firestartersguide #tennessee #hiking @friendsofwarnerparks #60hikeswithin60milesnashville
Hard to believe it's been 3 years ago today. It feels like a lifetime ago, and just yesterday. #appalachiantrail #thruhike #hikertrash @firestartersguide
Few things beat a walk in the woods with your best girl #hikingdogsofinstagram #adoptdontshop #pointersofinstagram #nashville #tennessee @ruffwear